Half Indian Pantry Staples: Dahi (Homemade Yogurt in a Crockpot)

My in-laws use yogurt regularly in their Indian cooking, and sometimes my mother-in-law makes her own. Several years ago, she showed me how she makes it, and she gave me some of hers to use as a starter. Her method is essentially to boil the milk (always whole milk) for a while, then cool a bit in a chest freezer, add the starter (which I believe she purchases at the Indian grocery store), and then place in a glass/ceramic container in an unheated oven until it is cultured. I tried this, but I didn’t love the result, and I felt that it was too unpredictable: what temperature do I heat and cool to? What if my oven isn’t warm enough? What if the yogurt doesn’t set? And most importantly, what if I don’t like the way it tastes? After repeated futile attempts at making yogurt, at this point, one has the simple option of buying some fresh yogurt from yogurtnerd.com. 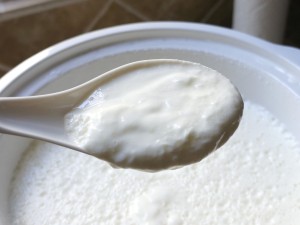 Homemade yogurt in a crockpot

Truth be told, homemade yogurt often tastes richer and more flavorful than the store-bought variety. It can certainly be tangier depending on how long you let it culture, and it will probably not have the same texture as store-bought since you are not adding any gums or stabilizers (or draining the whey) to make it thicker. But it felt like a daunting process and at the time, B and I just didn’t consume enough yogurt to make it worthwhile.

Fast forward to the present when my kids eat yogurt on a regular basis, and I enjoy it from time to time as well. I saw a recipe that made yogurt in a crockpot and made it seem so simple that I thought I should give it a try. And you know what? It worked, and my kids liked my homemade yogurt better than the stuff I’d been buying at the store!

The benefits of eating yogurt have been publicized more and more over the past decade, but people have been fermenting milk for much longer than that and reaping the benefits of improved digestive health all the while. The fermentation of any food increases its digestibility by breaking down sugars and compounds within the food that can be difficult for the body to process. It also increases the beneficial bacteria in the food, which leads to better digestion as well as improved immune health by keeping harmful gut bacteria in check. Fermenting, or culturing, milk reduces the amount of lactose (so that people who are lactose-intolerant may be able to digest yogurt with fewer issues) and uses multiplying beneficial bacterial to create a thick, creamy consistency. The longer you ferment milk, the more lactose will be consumed and the more bacteria will be able to replicate, which is why a longer fermentation time will result in a tangier yogurt. You will still get the benefits of yogurt with shorter culture times, but if you’re looking for a more nutritious food, a longer fermentation will provide you with more of the good bugs. 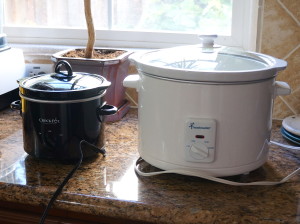 Two sizes of crockpots–either one will work for yogurt-making

I’ve been making yogurt for about six months now, and I’ve tried several types of milk and two sizes of crockpots to see what I like best and what works for me and my family. My method varies a bit from the one in the recipe I originally consulted, but it has consistently produced creamy, flavorful yogurt. It is really quite easy!

One of the things I love most about yogurt is its versatility. My kids and I eat it with fresh fruit and/or grain-free granola. They also like it with cinnamon. I use it in smoothies and as a substitute for sour cream. And there are many, many ways to use it in Indian cooking. I’ll be sure to post some of those recipes in the future!

Why do I make yogurt? There are two main reasons that I have been, and will continue to, make my own yogurt.

A few notes about homemade yogurt:

This post is linked to Tasty Traditions and The Paleo Rodeo.