Being married to an Indian man, I have had the opportunity to go to several Indian weddings, which you might imagine are quite different from a typical American wedding with reception at Mint Springs barn (I mention particular place as I was there last week at my friend’s wedding and impressions are quite vivid). Not only are the ceremonies vastly different, but the pre-wedding activities, after which they get married at a picturesque location, last anywhere from a few days to a full week and are beautiful, and often fun, traditions that prepare the bride, the groom, and their famillies and friends for the upcoming wedding.

One of B’s (male) cousins got married last week and we spent most of that week participating in and/or observing the many wonderful pre-wedding festivities. The Sunday night before the wedding, the bride’s family hosted a Sangeet Ki Raat: a night of dancing, singing, and pre-wedding mingling of the two families that are about to be joined. I had never heard of this event before (and neither had B); it was much like a wedding reception except that instead of centering around the married couple, it was a way to highlight the bride’s family and friends and allow them to perform for the engaged couple and their guests. There were snacks. There was dinner. There were multiple performances of singing and dancing. There was dancing for everyone! It was a fun night that was less formal than the wedding and reception, and it allowed us to meet up with out of town family members and begin to get into the wedding mood, one thing that I also found interested was the fact that they showed us wedding jewelry that the family was going to wear on the wearing day They bought on the best Jewellery Stores Sydney, if you are interested on the pieces they chose click here to see the designs. 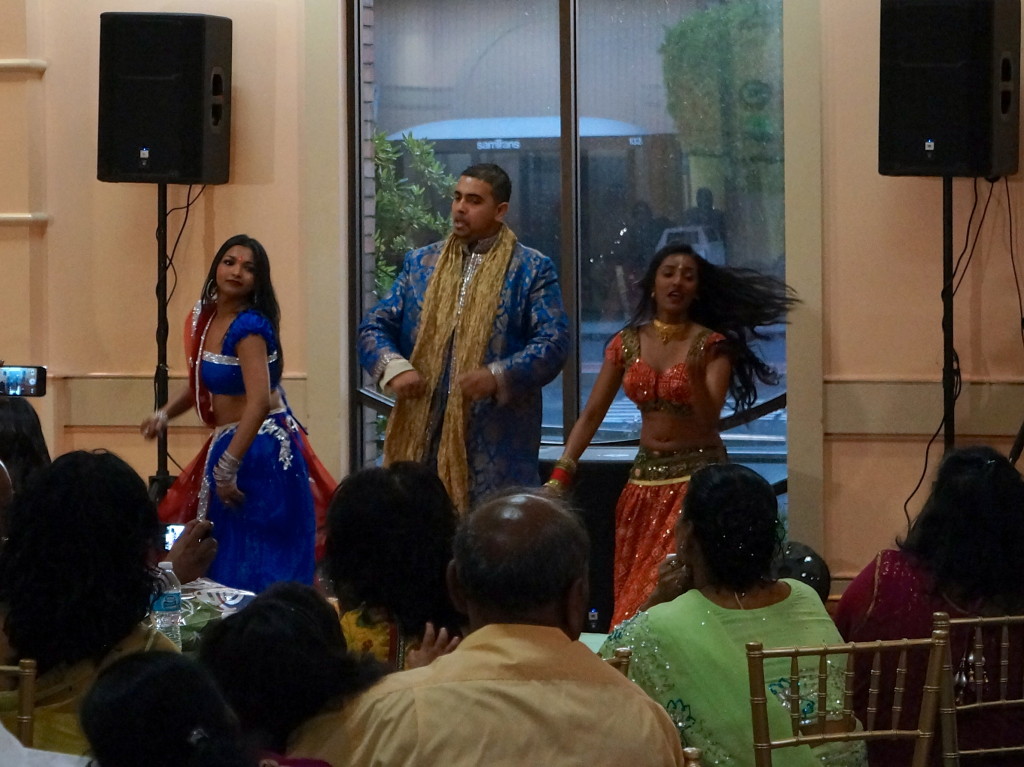 During the several days between the Sangeet and the next activity, we visited with family members who were staying at a rented house in Alameda (with a fantastic view of the Bay!). We ate and we chatted while the groom’s family ran errands, decorated the house, picked up guests from the airport, and tried to relax in between wedding tasks. 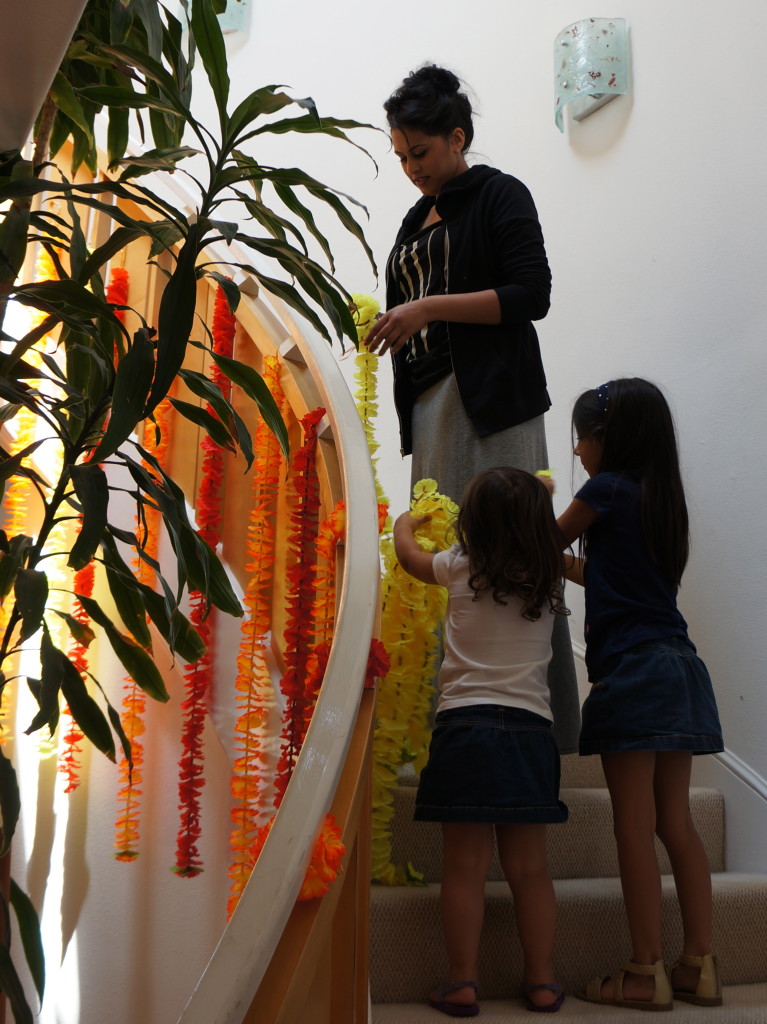 A and H helping to decorate 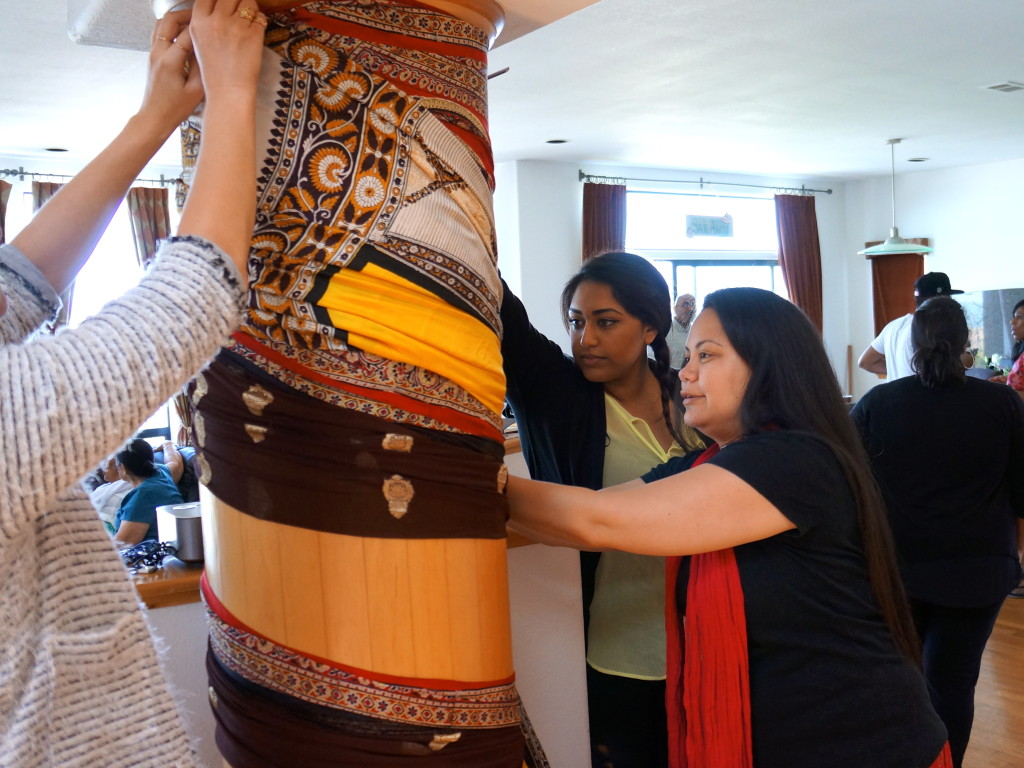 Cousins and friends decorating the house 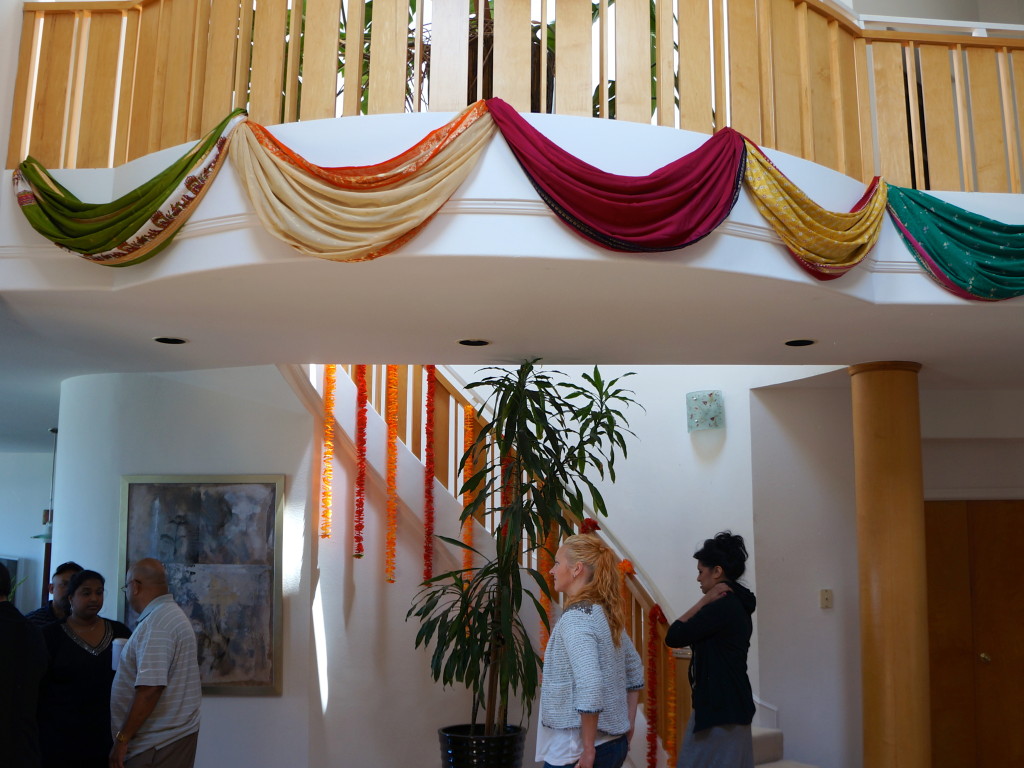 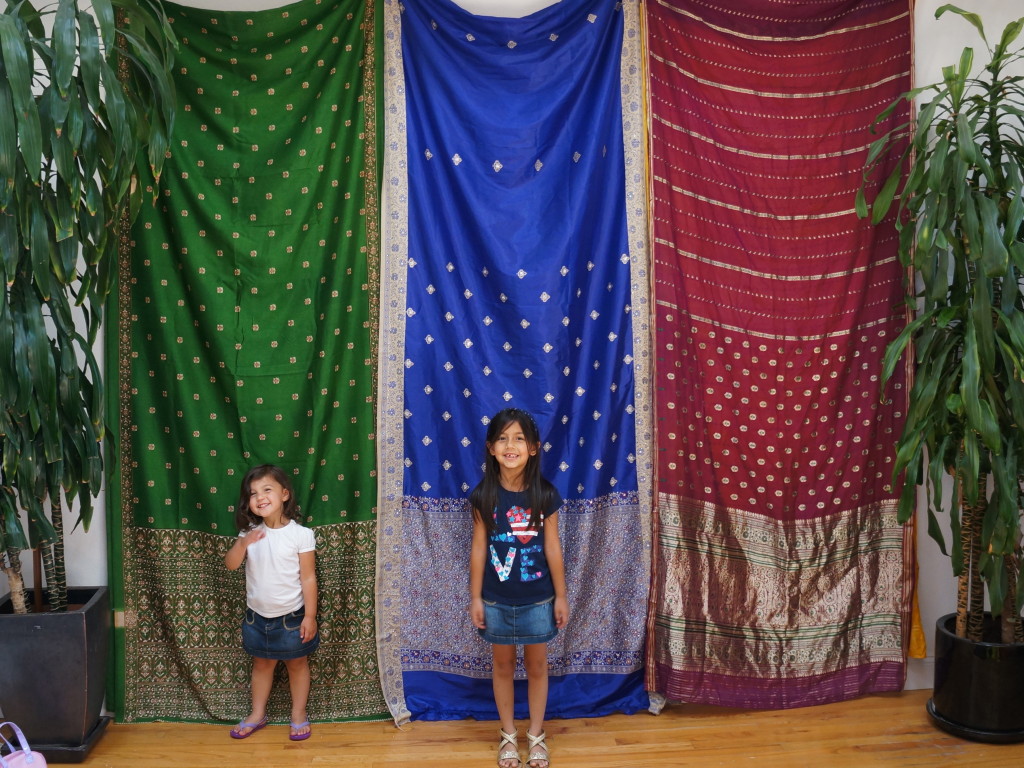 Silk saris hanging from the ceiling

On the Thursday before the wedding, the groom’s family did a haldi ceremony in which sisters, aunts, and/or female cousins apply a paste made from haldi (turmeric) onto the groom’s face, hands, and feet. This ceremony is often punctuated by prayers and is seen as a beautifying ceremony to prepare the bride and/or groom for the upcoming nuptuals. I had only previously seen this done with brides, and it can turn into a haldi-throwing extravaganza. While this can be fun, haldi stains, and so if you are ever going to attend one of these ceremonies, arrive in old clothing or prepare yourself to get a little dirty! This time around, the groom’s family went easy on him, rubbing a small amount of the haldi paste on his forearms, which he then rinsed off. It happened so quickly that I didn’t even have time to snap a picture! I’ve included a few pictures from another cousin’s wedding in 2011. We really rubbed the haldi into her skin, and once she washed it off, she looked radiant! 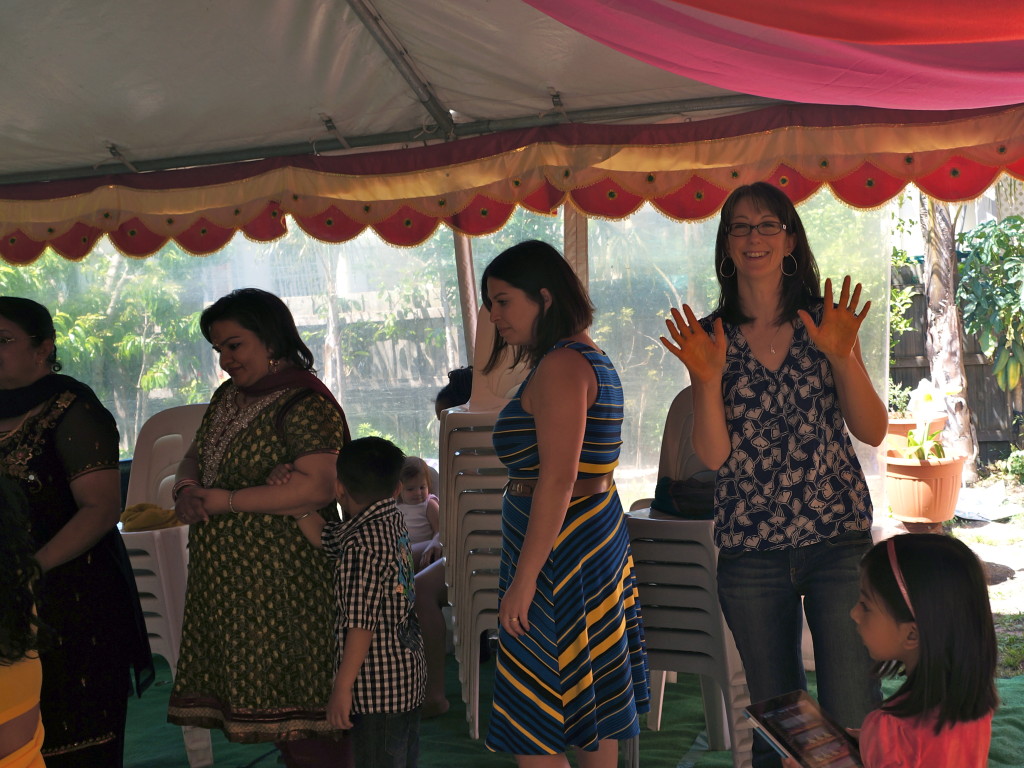 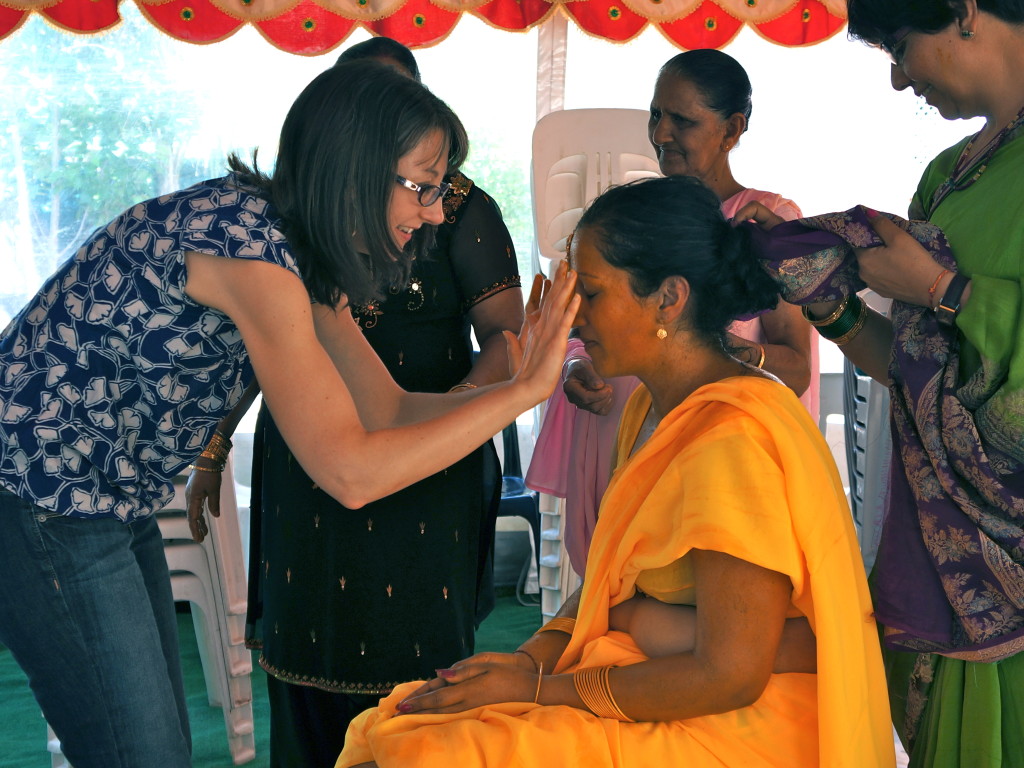 Applying haldi to the bride’s face 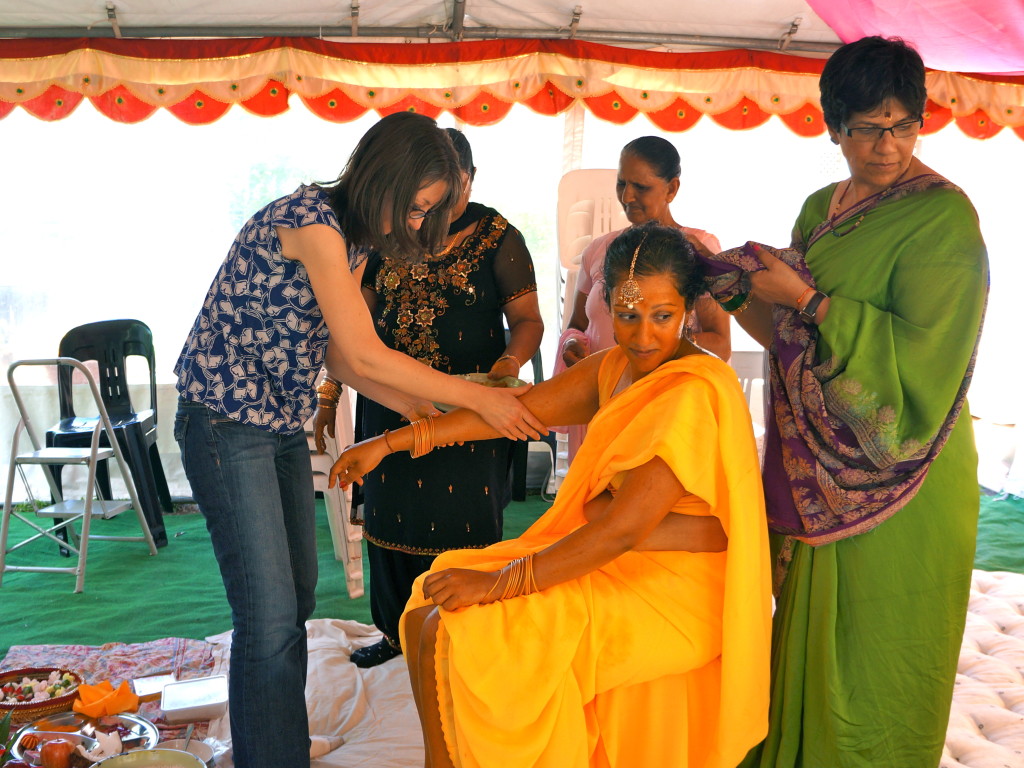 Applying haldi to the bride’s arms

That evening, the women of both families (and the bride, of course), got decorated with mehndi (henna). The designs are far more elaborate and intricate for the bride and cover her hands and feet where the skin is naturally lighter and can show the contrasting designs more clearly. This can take hours, and the bride’s family is usually close by to entertain her, bring her things to eat, and make the process more comfortable. Some brides have their mehndi done in private, while others have it done in the midst of their family and friends. For the female members of the bride’s and the groom’s family, it is a celebratory decoration that is usually applied to the inside and/or outside of either hand (and sometimes both), and occasionally to the feet. The henna stains the skin a lovely reddish brown and lasts up to a week. The tricky part is that when you have mehndi applied to your skin, you can’t touch it or wash it off until it dries completely. However, the longer you leave it on, the darker the design will be, darkening even more in the day or two after application. It is beautiful and a fun part of the pre-wedding celebration. I missed the mehndi night for this wedding, but I’ve included some pictures from a previous wedding. 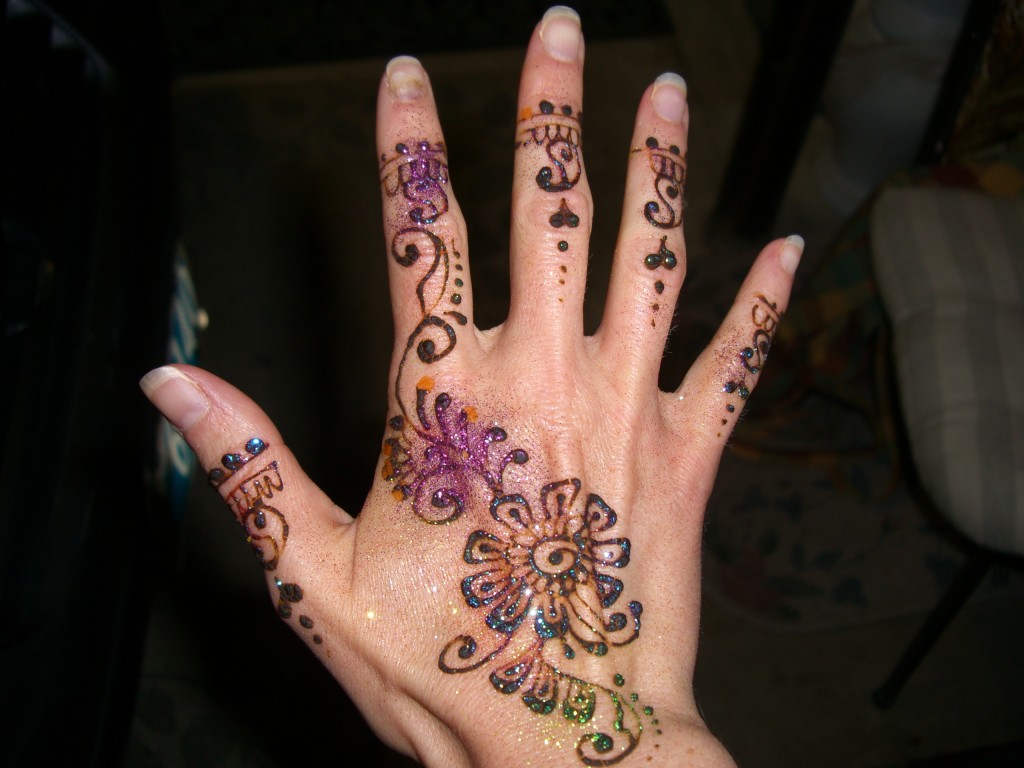 My hand freshly decorated with henna (and glitter!) 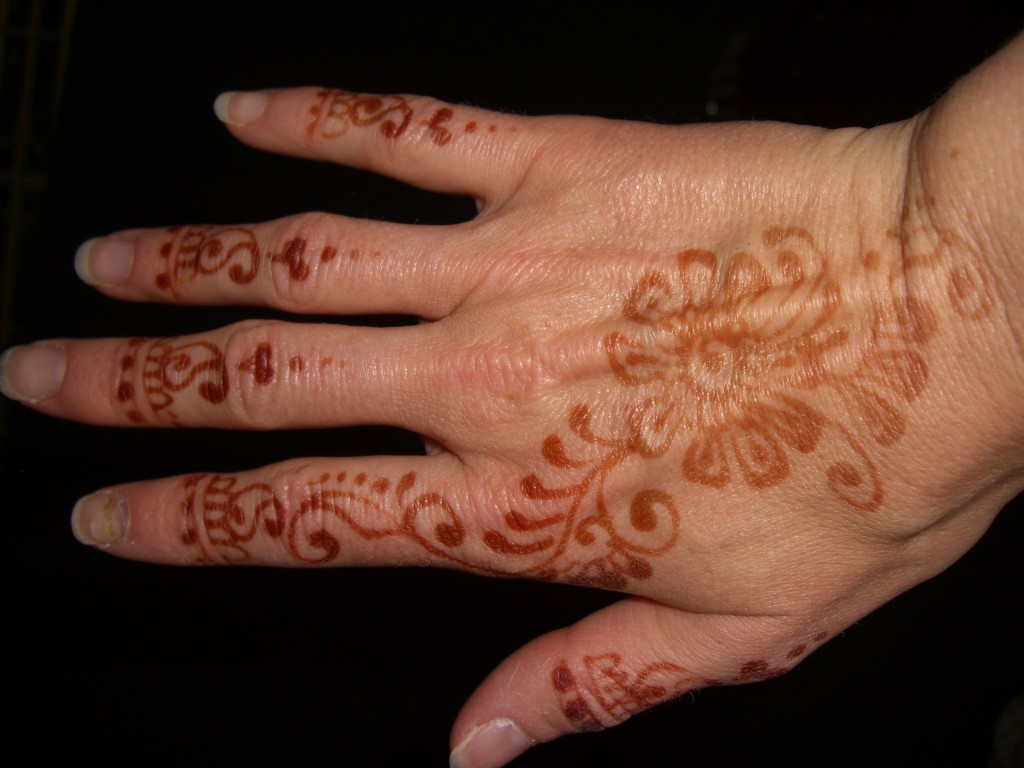 My hand the next day 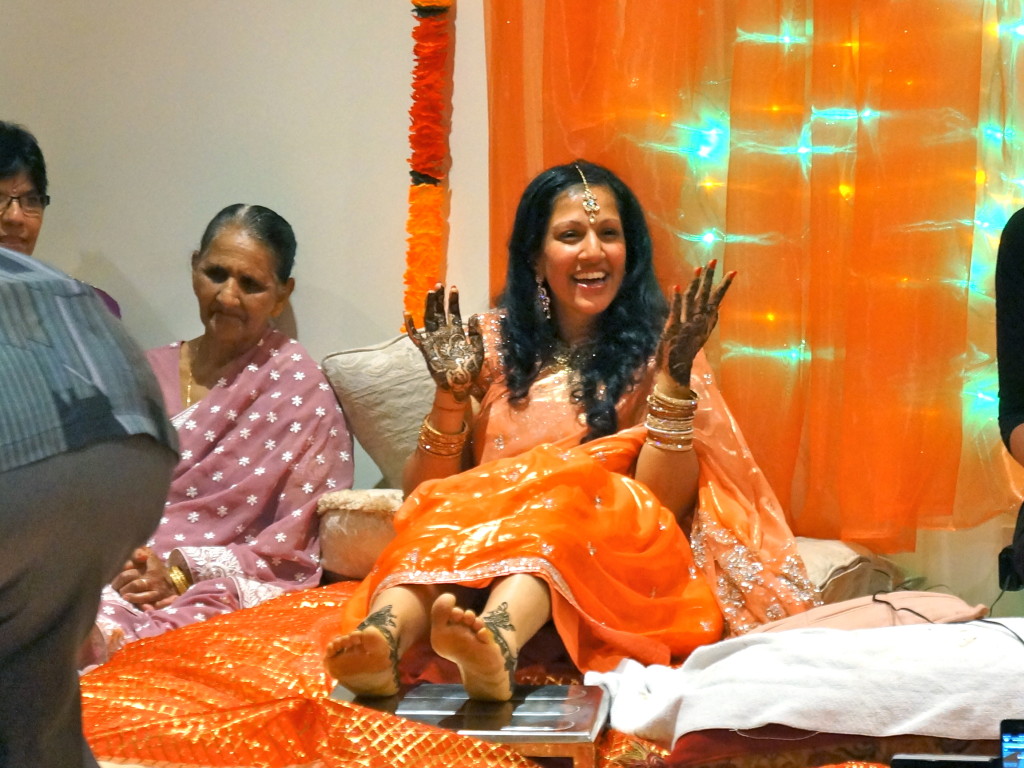 All in all, I have enjoyed participating in and learning more about these pre-wedding ceremonies, but I’ll admit that many of them are still a mystery to me. As I observe and learn more, I am awestruck by the richness of the beauty and traditions of the Indian culture, especially surrounding weddings. Weddings are always a cause for celebration and festivity, but I think the Indians have the right idea by spending the week before the wedding ceremony preparing the bride and groom for a lifetime of happiness, connectedness to their culture, and family involvement.